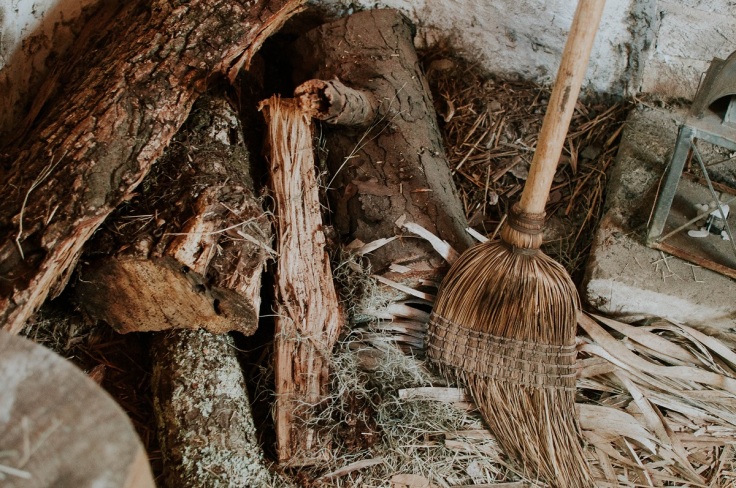 She sweeps winter from the garage
with a sneeze and a plume
laughs hard and alone
quite enamored by the middle road
the question: what makes a girlfriend
a girlfriend? what makes birch bark
wallpaper? She sheds this skin so heavy
rake the dust and debris off the beds
you just know who you are she says.

Perfect faces watch from the bark
large colorful women in big billowy skirts
say an amazing amount of nothing
bored, actually, unfortunate lecture
unkissed and hating their faces
who would kiss a girl if she is sick
just love your face she says
all proud and eggy and yellow.

I killed a guy in a dream
he looked bad
not dead but he had celery on his head
body parts under the earth
the remnants of life rubble and more debris
absorbed in ghosts married to disease
and faithfully bound up
in dead things.

It’s killing him to be friendly
constant pain, constipated
a day of pies, the edge of stupid
She hates his breathing, cranky and anxious
She left the conversation, she was a sourpuss
Flagstaff was simply not a good fit
or you could just say the woman’s a bitch.

And ate alligator
perhaps it should have been sweeter
the house of love
scones, fire and a jumping dog
comfortable with casual
a bit fat, a little pouty
and good free counseling.

A million promises and a million minutes
of blue that never dries, never sticks
such deep and soulful rhetoric
a thousand dollar check
will never become permanent
no phone calls or sweet messages
you don’t need another depressed
man she says

Poor, poor wound up selfish silly singing
would there be song without consciousness?
brief and functional, there is no anything
when love and hate are at the podium together
then there are just the squirrels
we should all just play bingo in the trees
it was quite an amazing thing to see
catering to his stupidity
depression is lurking, a recipe
a broken leash on a craggy tree
A girl of duty.

She looks at June and finds hesitation
the fridge is rattling noisy
a lot of noise for a long long time
she had better get ready
clean all of the spring pants
she wants to be improved
there are weeds to whack
better not kill those baby hyacinths
then they would be smaller
speaking in sighs across fluorescent halls,
talking up a storm in a V
like the birds she and Bridget saw
squawking across the sky
noisy winter is flying by
literally.

Photo by Jessica Furtney on Unsplash

for more on ‘journal poems’ visit another at https://pocketpoet.net/2017/04/04/life-is-only-a-borrowing-of-bones-a-journal-poem/