It is the first day of summer and my house in Flagstaff is up for sale. After six months of packing and repairing and painting and cleaning and arranging and rearranging. After seventeen wonderful years. It is now squeezed into eight hundred characters and thirty-eight photos. All that life and love we put into that place reduced, like a good red wine sauce, to convince someone else that it should be the home where they raise their girls or boys so they can roller blade on the deck or scooter down the hill or sneak up the woodshed to get onto the roof to get a new perspective on life and love and math teachers and divorce. A house where someone else will chop the wood and haul it into the house and warm the place with an 800 degree fire in the wood stove. A place where someone else will open the French doors on the hottest day of July (which, really, there aren’t very many) and turn on the one–that’s all that’s needed–fan and relish the circulation. Where someone else will open all the windows and sit on the front porch during a monsoon rain and watch the wet eruption pelt the street and sidewalk like sheets of relief, and rock back and forth in the old yellow bench, and breathe in the long-awaited,  moist air. Where someone else will rake nineteen giant, heavy-duty, contractor’s-size yard bags full of pine needles in September, and then again in November, all the while laughing when they are hit by a pine cones rushing down from the sky, or so it seems, but it’s just the top of the forest. Someone else can soak in the hot tub under 300-year-old ponderosas and oaks while the first snowstorm brews and watch the swirl of clouds over Mount Elden and ponder where the shovels ended up last year and whether the girls will fit into the snow boots bought on sale at the end of the season. Where someone else can wash glasses after a great deck party and look out into the yard from the kitchen window and notice the cinders in the chiminea have just a little remaining glow and see the one candle still flickering on the glass table and be reminded of laughing so hard you almost peed your pants just a few hours before. Where someone else can keep their eye on Maxine, she’s 96 this year, when she walks her little dog to the corner, and Carolyn, she’s 85 now, when she gets her evening stroll in to loosen up that back of hers. Or the new family, five boys, the first family with kids in that big house since Carlton and Caroline left after more than 40 years. Janet will tell you all her stories and the best one will be when there are cherries on the tree and she thinks the black bear is back. A fox family used to  curl up under the big bench, a spiral of furry red, and Laurel and the girls were amazed at the elk in the intersection of Harris Way and Linda Vista, a dozen of them, making their gigantic, yet secret, way to someone’s garden. Coyote poop was in the yard one year, an unidentifiable lump until the Fish and Game Guy came by,  and someone’s cat, just like ours, will hopefully outsmart that damn trickster and not get caught up in its teeth. The squirrels and crows will tease someone else’s dog and hopefully it’s not quite as athletic as my Romeo who ruined his knees trying to climb those tall trees to get those long tailed nut-loving bullies. Someone else will store holiday and other favorite stuff up in the attic over the garage, squeezing into the space and grateful for a little extra storage, and someone else will be amazed at how quickly they filled the three big bedroom closets with clothes and shoes. Or maybe that was just me and my thrift loving daughters who did that. Where did all those jeans come from? Someone else can stay up late in front of the fire, in their little rocker, and ponder the next day’s tasks, or yesterday’s news, a new poem or decide whether they should make a Flagstaff cherry or apple pie this week. This place that we have loved for so long will be someone else’s to love now, and it has no ghosts, I promise, not scary ones. Just the creative kind, if any, who inspire and warm and soothe. They guided us through lots of dance on the wood floors, lots of song in the shower, and great storytelling curled up by the fire. It is a good place, a very good place, and someone else should love it now. 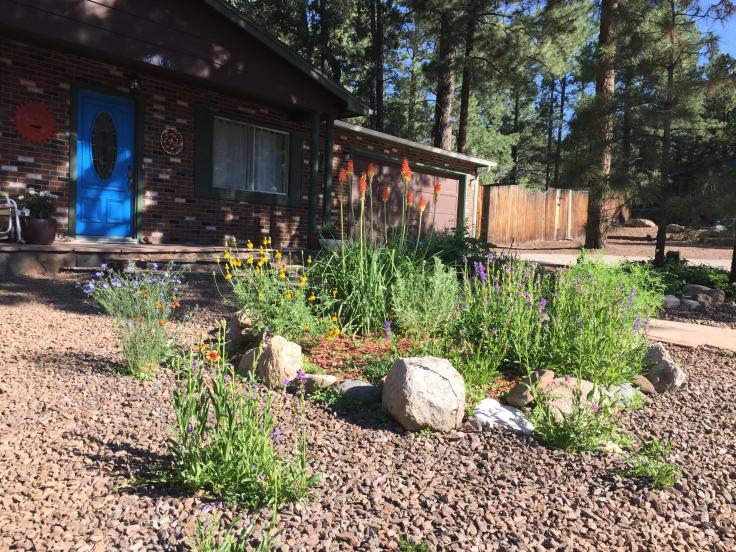