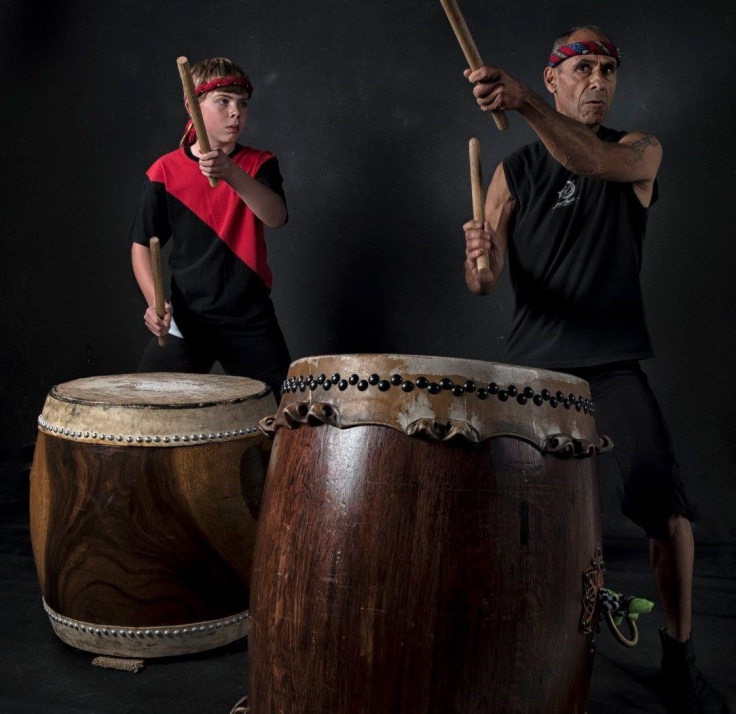 Who knew that on a beautiful Saturday afternoon in the Flagstaff Public Library, I would find the word I needed to capture my current state of affairs, and from Taiko drummers at that. Five performers pounding out their hearts, and pounding right into mine.

This group’s performance was part of the Library’s 30th anniversary of the the building on Aspen Street. The drummers’ physicality and power, a few of them just skinny kids, drew even the grumpiest of those in the building toward the  corner where this band had set up. The complaints of those who “came here to read, damnit” were calmed by this explosion of sound and rhythm. One song, in particular, answered a question I have been asking for months. It helped me find a calm that I have needed.

What is this space, place, time I am in. No now. No next. But a content determination to go forward. Whatever that is or means.

The Taiko instructor David Ramos, pictured above, introduced a song that he had written explaining the importance of the pause in the song, or the ‘ma,’ as he referred to it.

Ma is a Japanese term that is used for space, interim, or the place between, among many other meanings. Ma. Yes! That’s the term that’s been sitting on the tip of my tongue for months, maybe years. Maybe a lifetime, but definitely these days. I was not only moved, literally–my heart beat happily with their drums–but physically, sensually, and spiritually as David promised Taiko drumming can do to you. I was calmed. And I had a new word.

You see, being a woman of words as I am–I like them a lot, words that is–I need them, actually. I am most confident, secure, I am my strongest, when I can put a name to what I am feeling, experiencing, understanding, etc. An addiction perhaps, and this one is as simultaneously fickle and constant as addictions are.  I often misuse words, or get them wrong (bring and take), pronounce them incorrectly (Vietnamese), insist on old rules (don’t end sentences in prepositions). Nonetheless, my hanging on to them, and them to me, is not unlike a junkie and her needle. I was drawn to the pen and paper as a mere child, and I have not let go, nor will I.  A healthy dependence, perhaps, but distinct.

Thus, not being able to put my finger to a term that describes my current state of affairs, well, I have been nonplussed.  What is this?

I am preparing to leave the house where I have lived, the house I have owned, the house that has cared for me as I have for it, for 17 years. And while I know my next residence will be south of Flagstaff, in the Sedona area, I do not yet know where. I can’t even call this state of affairs a transition, really, for a transition seems to have a now, and a next. I have neither.

I have disrupted my now so determinedly that I do not recognize the realty, or unreality, when I enter that house, the one I own, as I do each weekend. I go in to pack, paint, consider, question, and pack some more.  Possession is an odd thing.  While I may “own” it, it no longer defines me. It is not my now.

And I am staying in a lovely home in Sedona, to which I return every Sunday night, a house that belongs to someone else, were I have carved out a small comforting corner. It holds me like cupped hands, and I am safe and pleased. It is plentiful. It is close to work. Yet it is not my next.

I am in this space between things. Between times. Between decisions. An interval. And we, I, live quite dependent on next. We have all experienced that feeling of anti-climatic when on vacation, or Christmas morning. The preparation was so big and fun and busy. Preparing for next. But when next becomes now, sometimes it offers a dark sullenness.

I have forced myself, not for the first time, into a state of nextlessness.

And now that I have a word for it, I am actually a bit more comfortable with it. It is not sullen. Or dark. It is just . . .

This ma, this time between beats, this space between words, this pause between inhale and exhale is refreshing.  And frightening. And, really, is no different than every second of every day.

We live so convinced we control time and space. We live, I live, thinking I know next. But, really, do we? Ever?

A test of patience and strategy.  Reflection and planning. No now. No next. Ma.