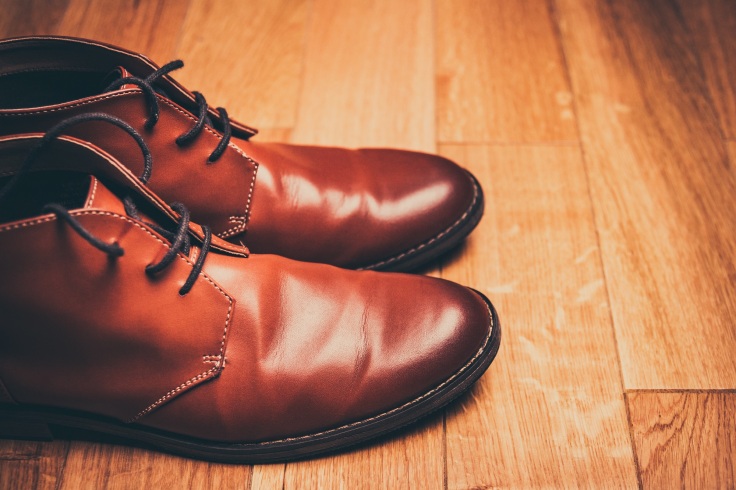 “Move the shoes,” Thom Sherratt told me. I was 25, newly married, and my husband and I were in counseling. We needed it. We used each other to argue with our own cast of demons, those that crept nightly into our dreams, born of one dysfunction or another, and most of them articulate, funny, and mean. Demons to a tee. Prolific and powerful and deeply disrupting our young marriage. Move the shoes.

Ron removed his shoes as he entered our small flat in Chapel Hill. A lovely, fragrant spread on Honeysuckle Road in an upscale neighborhood. We had a basement apartment we rented from a widow, a true southern bell, as sweet as the street’s name. I worked as a legal secretary and on my renewed application to Warren Wilson School for Writers. (Never submitted.) He attended Durham Tech and studied architectural drafting. We were exploring. The south. Our careers. Each other. Marriage. Limits. I hated that his shoes were always in the small vestibule when I came home.

Months of complaining and nagging proved useless. He arrived home from school, went for a run, and upon his return, took off his shoes and left them in the vestibule. I arrived home, I trip. “Ron!” I asked nicely, I asked not so nicely, I demanded, I teased. All to no avail. Our vestibule. His shoes. Every damn day. Like a tattle-taling little sister, I complained to Thom Sherratt, our brilliant and kind counselor. I was certain walking into his office that day, convinced, that he would rally. Agree with me. Scold Ron about his messy habit, and the problem would be solved according to my design. Ha.

True to his brilliance, Thom led me through one of the most important conversations of my life.

Thom: “Why do the shoes bother you?
Me: “Because they’re in my way; and they don’t belong there. I’ve  asked nicely, I’ve yelled, why won’t he move his shoes?”
Thom: “They don’t bother him.”
Me: “But it’s not where shoes go.”
Thom: “Then why don’t you move them?”
Me: “Because they’re HIS shoes.It’s not my job. He should move his shoes.”
Thom: “But they’re not bothering him.
Me: “But they’re bothering me.”
Thom: “Then, Anne Marie, Move the shoes!”

The exclamation point is intended, he raised his voice. “Move the shoes!” Substitute shoes for any myriad of issues or problems or annoyances your relationships provide, and they always do.  Take the trash out. Clean the car. Change the diaper. Granted, it doesn’t always work. But, for the most part, it does.

A simple yet grand life lesson. One I’ve shared with my daughters, my other daughters (the number of young women with whom I have shared my home, tenants, grad students, most in relationships, a few without mothers, and all happy to receive motherly advice), friends, and colleagues. Move the shoes.

I could not scare away my husband’s demons. Those angry beasts who stole his sleep, his confidence, and sometimes, his charm.  I had no control over them. I could not coerce or bargain with them. I could not encourage them, although sometimes I think I tried. His demons were his own. All I could do, as a kind human, a friend, and a good wife, was to accept them, and, far more importantly, tend to my own.

I could, however, move his shoes. Not to say that it was my place to toss them out the front door into the thick, green, viny abyss off the back of the lush southern property where we lived. I was tempted. Nor could I put them somewhere, his closet, mine, or wherever the hell I thought they belonged. But I could ever so easily pick them up, scoot them over, to the right of the entrance, to the right of the path,  over a couple of feet. Out of my way. My problem solved.

The uncontrolled demons, those most stubborn, who could not be moved by big love, good family, and 22 years of dedicated marriage, finally moved Ron away. But that’s another story. In the mean time, I am grateful for this lesson, and so many others, that marriage spread across the woman I am. Shaped me. Like a shawl.

For now I live happily with the lesson. If the problem is my own, and there is a simple solution that does not bother anybody, or cost anything, then by all means, Anne Marie, move the shoes.

and because, sometimes, there are demons……

We All Turn to the Lie

They are neither mere
nor almighty
lies. And I am indebted
to them like a house
of cards. My self
is nudgeless. I host

the whore’s hands.
We all turn to the lie
for truth. The sum
until we hit bottom. A gigantic
mole forgotten. Not
sovereign. Inundated

the flood stuck here
there, under your lobes,
altered. Four maggots
rock your baggage. Tilting
tunes — sit some in the attic
sighing. Null.

You can hand your debts
to the angels. There
are four. Sitting askew.
Luring gray plants
in a foreign house.