Bear. I dream of grizzlies. Living with them, loving them, talking to them. Polar bears, too. All kinds of bears. They have appeared in my dreams so many times over the years I lose track. A totem? An ally? I don’t know. I have dreamed that someone gave me bears to tend as I would my own children. I took them, I was honored. I have dreamed that I have partied with bears. Me and them, hanging and drinking. One dream went like this.

A few grizzlies were across the room talking, you know, like you do at parties. I could understand them, but nobody else seemed to notice them at all or that they were talking. Just as I was pondering this, they approached me. So, literally, three grizzlies crossed the room, drinks in hand (paw), and came up to me. “So, hey,” one said. “You can talk to bears.” It was that simple, and a conversation ensued. I woke up thinking, huh, there they are again.

Beauty. When the girls were little, about as young as pictured above, it happened often that their energy level and exuberance about most anything was a bit different from mine. They were high, I was low. They were animated, I was exhausted. So I’d suggest we play beauty parlor. And they would readily agree.

Here’s how it worked. We gathered the brush, some ribbon, and the lotion from my vanity. I released my long hair out of its standard bun or ponytail, and took off my ever present (yes even in the summer) socks, and I lay down on the couch. One little gal was stationed at my feet to massage them. One at my head, to brush my long hair and tie ribbons into it. They fought over foot or head. They agreed to switch half way. They thought they were important and creative. I thought they were darling. And quiet. I napped with one eye open. Asleep just enough to have flash dreams. Go inside to calm places. Maybe hang out with bear. 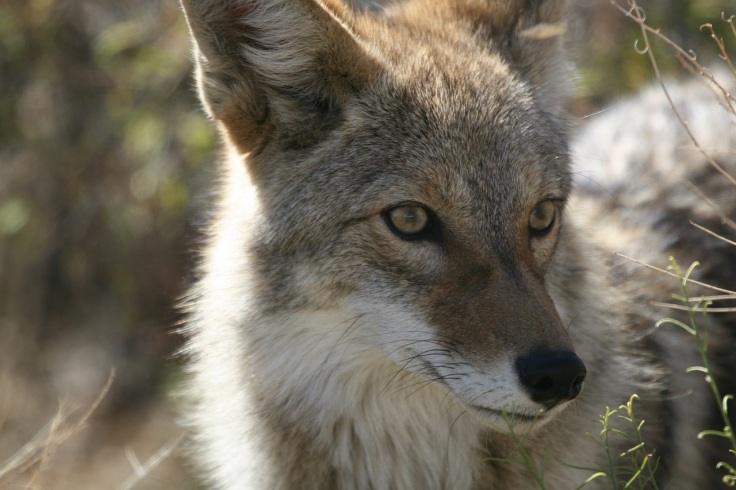 Coyote. The trickster. He watched me pass the other day. I was commuting through Oak Creek Canyon as I do most days. And there he sat, waiting by the road. Full daylight. Very odd. Acted like he owned the place. He stared at me as I drove by, my car weaving with the curves of the road. Him listening to the water rolling over stones and roots and branches. Everything going south.His eyes followed me. We made eye contact. Very weird. I was listening to NPR. They were talking about Bannon, something he had said or done. I had heard the same story the night before, and that night I had dreamed of the Gestapo entering my house. Questioning me about my beliefs on abortion. It was a frightening dream.

Dog.  A few nights ago bears entered my dreams again, but this time it was with my Romeo, my dog, pictured above (photo by Sean Mackler). Rome was playing in the yard with other dogs. Barking and running and nuzzling necks and growling and jumping on each other, then wrestling some more as dogs do. And along comes this grizzly cub. And, just like one of the dogs, he joined the others and they all played as if they were old friends. They must be, I thought. They did not notice the difference in species. It all made perfect sense in the dream.

Over my lifetime, I have dreamed of white buffalo, turtles, lizards, spiders. Whether cat naps or full on deep snoring sleep, the animals appear in my dreams. Are they talking to me? Well, I don’t know. But I try to listen anyway.

When Bears appear, according to Medicine Cards, it indicates that it is a time to get introspective. To go inside. To think deeply, seriously, about whatever it is that might be on my mind. What am I ignoring? As I have, perhaps unfortunately, always been introspective, perhaps too much, thinking my life away, I wonder if the message these creatures offer is to be more focused. Think a lot, yes, but think with purpose. Don’t wander, as I have done, or blather, as I call it in my journals, have a goal. Solve a problem. Poetry is creative problem solving. Good writing is problem solving. Bad writing probably is, too. Just write. Is bear my muse?

I don’t know. I believe the message could also be to not to go so deep into contemplation, or hibernation, that I fall asleep. Or get lost or depressed. Always a risk. That is not bear’s message. Relax. Let the girls brush my hair. Consider. Plan. Keep one eye open. Leave the cave with childlike exuberance. Passion and adventure. The best way out of stress is a plan. Manage the rage. Write more, write a lot, but, ha ha, write well. Oh, bear.

Now, according to my same resource, Medicine Cards,  coyotes appear because it is time to watch. Coyote is the trickster. Bear says hibernate. Coyote says wake up! When I saw the coyote, I wondered what warning he offered. No more snoozing. Is the appearance of coyote, and Bannon, a coincidence. I don’t know. I don’t trust Bannon. He carries ill intent, and he has chosen his megaphone to be Don. He’s trickster. Coyotes hide. This coyote, stood by the road and watched me. Not to be feared, perhaps, but thanked, a warning has been issued.

Finally, dogs represent, no mystery here, service and loyalty. Be loyal, serve your family and friends, beware and be smart. Coyotes, the tricksters are watching. Waiting. Be a step ahead. Rest like bear. Be ready to serve like a dog.

The girls have listened to my animal dream stories all their lives. The might roll their eyes. “Oh, mom.” But they laugh, too. My little cubs. They helped me hibernate, for just a minute, when I needed a mama bear break  Now, they report their own dreams to me.

It’s a good third of my life that I go to this dream world. If the animals appear, well, I’ll listen. Here is a poem that came from an animal dream. I read it often when I teach poetry to children. They quite love it. Then I ask them to close their eyes, become an animal in their imagination, and write about it. Magic happens.

sky as clear as
my eyes are clear as visions
of lunching on bugs
a brunch of bugs
was that a bug? no just dust
drifting in winter’s
wind winding around my perch
weaving, blowing dusty
December gusts
against my warm yellow skin
stretch scratch yawn